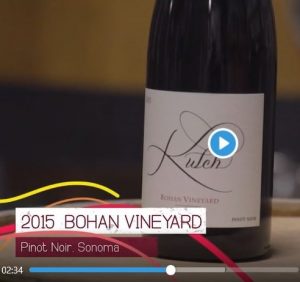 Trout Gulch Chardonnay is impressive for the way it balances ripeness and fruit density with the more savory, mineral-driven qualities that are so typical of the site.

Jamie Kutch’s 2018s are very pretty, vivid wines that very much capture the personality of the year in their translucent expression of place. The generous crop ripened late here, as it did pretty much everywhere. Kutch told me he treated the wines as gently as possible in fermentation. With the exception of the Bohan Graveyard Block, which was made with destemmed fruit, the 2018 Pinots were done with essentially 100% stems and aged in mostly neutral oak with no racking until July, when the wines were prepared for bottling. The 2018 Chardonnays are equally promising.

Jancis Robinson says the following in January 2020 about our 2018 vintage wines:

The 2018 Pinot Noir McDougall Ranch offers more dark fruits as well as notes of crushed violets, smoked earth, and some rocky, minerality notes. It’s beautiful on the palate as well, with medium body, a terrific sense of elegance and purity, fine tannins, and a great finish. It’s certainly my favorite of the 2018 barrels samples.

Another gorgeous wine in this range, the 2018 Pinot Noir Falstaff Vineyard is beautifully perfumed, lifted and gracious. Sweet red cherry, blood orange, mint, spice and a touch of whole cluster brightness all grace this exquisite Pinot from Jamie Kutch. The 100% stems are already very well-integrated. This is such a captivating, finessed wine.

“The McDougall is a total stunner.  I loved it.”

“This is the kind of perfume you could dab behind the ears for a pheromone effect. A wine of substance that engages and caresses.. ..the nose was dreamy & the overall impression was harmony. I have been to the mountain top & it is good”

Jancis Robinson says the following about our 2017 vintage

“Kutch wines are the essence of transparency and freshness”

” This is a stellar set of wines that shows just how compelling 2017 is for Sonoma’s Burgundian varieties. “

Jancis Robinson says the following about our 2017 McDougall Ranch

Quite outstanding!  There’s a future to this wine.

The Pinot File awards Kutch Winery of the Year!

“His talent as a thinker and innovator led him to push the envelope successfully.”

“A complete wine that has everything you could ask for in Pinot Noir. Ridiculously good.”

Jamie Goode of Wine Anorak says the following about our 2016 McDougall:

“A serious effort showing real elegance, and on the third day this is really singing. 96/100”

“This is a wine to share with your partner for it could easily lead to romance.”

Eric Asimov of the New York Times says the following about our 2014 Chardonnay:

“One of the best California Chardonnay’s I have had in a very long time, textured, harmonious, long on minerality.”

“Truly, this is a wine that can make you blissfully happy.”

Jamie Goode of Wine Anorak says the following about our 2014 Chardonnay:

“This is one stellar bottle of pink that should be consumed in ice cold multiples.”

“Incredible fruit! Rarest and purest cherry and raspberry. Has the juice of California but the sophistication of Burgundy with just enough tannin to shape.”

Decanter Magazine awards us the following for our 2013 McDougall Ranch:

“This (2013 Sonoma Coast) is one of the best artisan Sonoma Coast Pinots readers will find for the money.”

“The (whole cluster) style puts Kutch on the forefront of Pinot Noir pioneers in California”.

“Jamie is a thinker and innovator, rather than someone who follows the pack.”

“…I would point doubters to a lineup like Jamie Kutch’s 2012s. Not only has Kutch notably reversed his style of winemaking toward restraint, but he has embraced the use of grape stems in fermentation… ~Jon Bonné, San Francisco Chronicle”

“the balance of fruit, acidity and whole clusters is magnificent…”  “beautiful saline notes linger on the chalky, nuanced finish…”  “this is a Pinot of serious depth and density…”

Food & Wine Magazine Editor Ray Isle sits down and tastes Burt Williams on Kutch 2011 Savoy and he likes it the best!

2011 Kutch McDougall Ranch Sonoma Coast Pinot Noir ($59, 13.6%): This site on a ridge north of Cazadero provides Jamie Kutch and others with a remarkable intensity. Past some subtle oak tones lie the conifer and vibrant raspberry aspects that mark this part of the coast. It’s matched by rich lower tones and sarsaparilla warmth to the fruit.

2011 Kutch McDougall Ranch Pinot Noir 95 pts. The highlight among these current and upcoming releases, Jamie Kutch’s 2011 Pinot Noir McDougall Ranch is drop-dead gorgeous. Savory herbs, dried flowers, black cherries and licorice all jump from the glass in this deep, layered wine. The 75% whole clusters come through only in the bouquet, as the fruit is so intense, they are barely noticeable on the palate. The balance of fruit, acidity and tannin is exceptional. I can’t wait to see how McDougall Ranch ages. It is clearly one of the most impressive wines of the vintage.

2011 Kutch Sonoma Coast Pinot Noir Very primary red-fruited nose which continues on the palate – A Punch & Judy show of dueling sweet and sour cherry flavors, complicated by an undertow of grape stems. Like a Dujac Morey-Saint-Denis.

The Prince of Pinot says: 2011 McDougall Ranch was “The clear favorites of the group” calling the wine “Extraordinary”