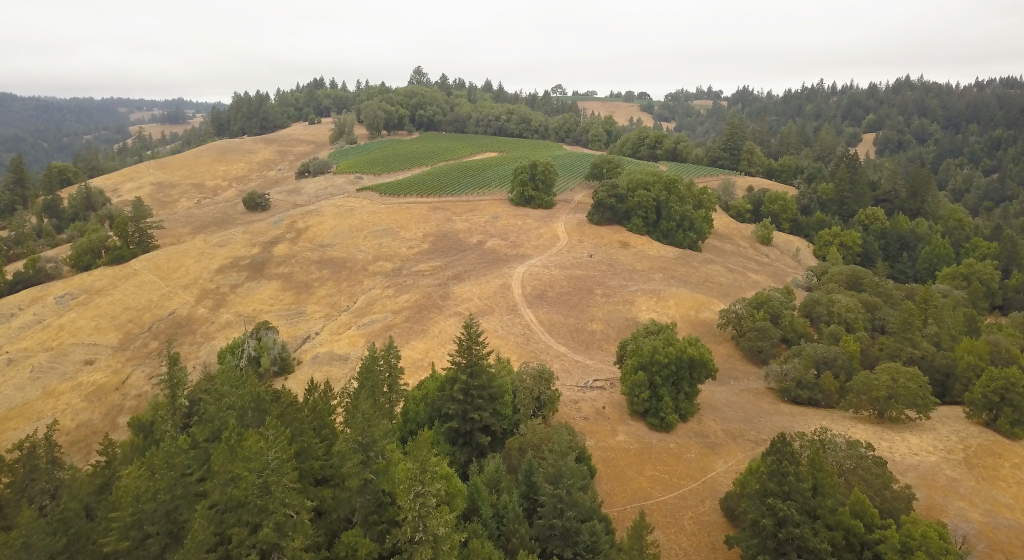 At 935+ feet elevation and a mere 3.5 miles from the Pacific Ocean, McDougall Ranch truly is a unique, cool climate site.  Planted in 1998 on a southern slope to clone 114, the vineyard beautifully expresses varietal correctness.

The oldest bedrock occurs on steep slopes and high hills and mountains in northern Sonoma County. Called the Franciscan Complex from exposures near San Francisco, it is an eclectic collection of different rock types that date back as far as 150 million years.. Mostly of oceanic origin, the Franciscan Complex includes sea-floor marine sediments along with iron-rich igneous volcanic, plutonic, and metamorphic rocks. These rock types originated far offshore and became mixed together by faulting at a fundamental plate tectonic geologic boundary called a subduction zone, where the ocean floor tectonic plate dives under the continental edge.

One result of complex interactions at subduction zones is “mélange”, the French word for mixture, complex rocks with textures. Franciscan Complex mélange is particularly well-exposed along the Sonoma County Pacific coast and on high ridges. These igneous rocks and the associated sandstones and conglomerates are part of the ocean floor that was scraped off onto the continent during subduction; an ophiolite complex designated part of the Great Valley Sequence.

Rock distribution in the Franciscan Complex is random, as are the soils that come from their breakdown. The recent land rush to find quality vineyard sites in Sonoma County has resulted in vineyard development of slopes on Franciscan Complex rocks and their overlying soils. The varied soils in these areas present new and sometimes formidable challenges for vineyard development and management. The best areas for development will be on soils developed from marine sediments, primarily greywacke sandstone and shale.